There’s a certain feeling that comes from creating something with your own two hands. No matter what it may be, the time and effort put forth always leaves a reward, and the satisfying feeling of accomplishment.

The art of weaving is one of those things that takes time and patience. I’ve always been drawn to large wall hanging weavings, but it wasn’t until after I saw them placed around Humboldt House that the desire to create one of my own really sunk in. I love the way a blank wall can instantly be transformed by interlocked textiles. There’s so much detail and color that can be incorporated into a weaving – they can really add a lot when decorating a space.

For my first attempt, I created my own loom using a branch and gathered up a variety of yarn and string. There’s really no right or wrong when it comes to weaving in my opinion–the flow of colors should happen naturally as you see fit. Once I started, I just created the pattern as I went along. I really like that branch weavings can be created on any scale depending on the size of your branch. Whatever your choice, big or small, here’s how to create one! First you need a branch. It’s best to use one that has a good “V” formation. I found this one outside while I was taking a walk, but try scouting the beach or woods for some, too! String (I used a combination of yarn, twine and embroidery floss for different textures in my weaving.) I used a large needle to help navigate my string in between the loom. I found this easier than just weaving in and out with my fingers. Some of my string was too thick to fit through the eye, so I just tied it around the body of the needle. To start, create a loom by tying string across the width of the “V” that the branch creates. Secure with double knots on both sides, and make sure your string is tight! 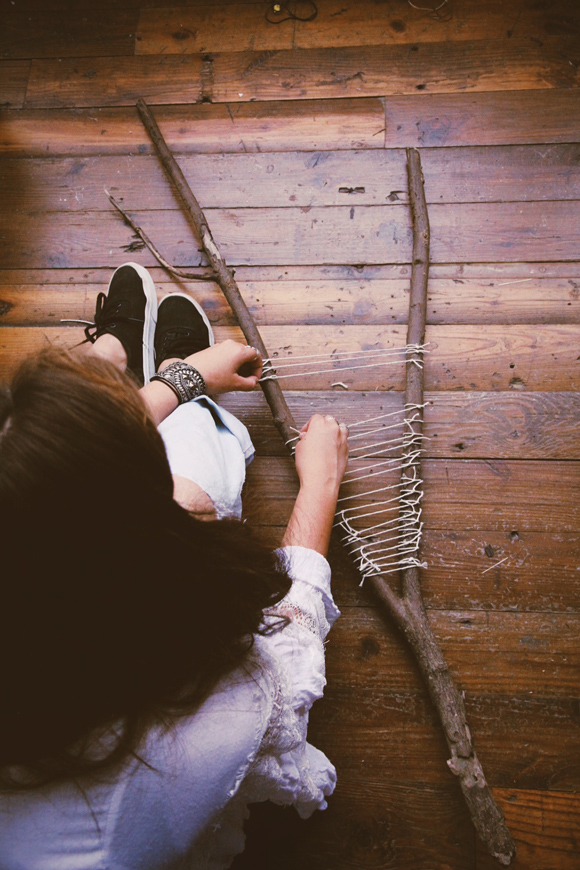 You can make the loom as large as you want, but I went about half way up.

Next, choose the color of string you want to start with. I wanted to keep my weaving more neutral, so I started with an off white yarn. Tie this string to either the top or bottom of your loom, (wherever you want to start), and tie the other end of the string around the needle (or through the eye if it fits!).  I started from the top and worked my way down. I did a basic over-and-under weave throughout my entire weaving. When you reach the top or bottom of the loom, just loop the string around and continue the over-under pattern back up (or down) the loom. I found that weaving is pretty intuitive. As long as you have an idea in your head on where you want certain colors, you can use the same over-under technique and go in any direction. When you want to add in another color, tie off the previous one to the loom, and then tie on the next one. It’s best to snip off the little excess ends so they don’t get in the way of weaving as you go along. I added in some deep red and dark brown to mine. As long as you have the over-under trick down, weave away! And of course, feel free to follow along with the pattern that I created :) I tried this same technique using one of our sun sticks for a smaller weaving. Using this smaller stick was actually harder than using a bigger branch because you’re working with a smaller space. I love how cute it looks though, and it takes a lot less time! It’s so exciting to see the end result! I love the way these look hung on a wall or placed on a shelf. Have fun, and be sure to let us know if you make one!

Very cool! And definitely easier than a loom and using shuttles!

What a beautiful and unique DIY! Definitely need to try to make one for myself

VERY cool, such a unique way to weave!

Love this… I have a huge blank wall in my new space, will be trying!
Aesthetics in Wonder

This is so cool, Jan!!! Photos are on point too, as always.

So beautiful !
You have always good ideas Jana !!!

that is so cool!
http://lifturbum.blogspot.ca

this turned out great!

Thank you for this, I did colour and design and weaving at technical college many many years ago, but on a larger scale,I have used copper wire, all sorts, your pictures of instruction are excellent on warping up, brings back lovely memories.

Thank you–this is great! I think this would be a great summer art project for kids, or anyone! First, we have to take a hike…..!

Beautifully, naturally creative. Thanks for sharing.

what if you left the different colors attached and picked them up down a row or two. So many ways to create. Thanks so very much!

Always looking for a project on camping trips. This is one everyone can do. From finding their own stick, picking their own colors. Perfect!. Thanks for another great idea .
J.

Loved this and made one myself ❤️

I have done this with yarn on dear antlers. Sometimes I paint the antlers and then use bright colors and different textures of yarn.

Really pretty, I love that it’s hand made and the colours really add that something extra. Alina from The Fairytale Pretty Picture

I love to branch weave.Your tips and pictures help me alot. Thank you. YOU do GREAT works of art.

@Bonnie “And definitely easier than a loom and using shuttles!”

This looks so much fun but how do I preserve the project? Won’t bugs get in the wood like spiders and destroy my weaving?

This looks like fun, and I think my art class would find it so.

I just love this decorative work and shall try to find a suitable twig.
Thanks for showing how to do it.
Margit