After earning a master’s degree in clinical psychology with a concentration in sex therapy, Alexandra Fine realized her calling in life: “My true passion,” the 31-year-old says, “will always be passion.” The co-founder of Dame, the new line of modern, tech-forward female sex toys, means this quite literally. After meeting and teaming up with Janet Lieberman, a MIT-trained mechanical engineer in 2014, the two realized that well-designed options to enhance female pleasure were woefully missing from the market.

Why sex toys specifically — where did your interest start?

“I’ve always been interested in sexuality. As far back as I can remember, it seemed like a really natural thing to be curious and passionate about. For example, I went to a drag show as a kid — my aunt took me! — and got in trouble for talking about it excitedly in school. It was moments like these that made me realize about just how stigmatized the topic was to an outside audience.

I went on to earn my Masters in Clinical Psychology with a concentration in sex therapy from Columbia University. I loved learning and studying human interaction. I soon realized that my skills would be better put to use making concrete improvements to people’s lives, so I began developing my own vibrators and asking friends to give me their feedback. After gaining startup experience with an organic shampoo company, I decided the time was right — aka I got fired J — to put this passion to work in the world of sex toys.”

Take us through how Fin and Eva II work: what makes them unique?

“Eva II is an updated version of Eva, which was our first product. Eva quickly became the most highly crowdfunded sex toy in the history of…well, the world — and provided a unique alternative. It’s the first hands-free, strap-free, couples vibe and was created to be worn by a vulva owner during penetrative sex. It tucks inside the labia and provides clitoral stimulation — something that over 75% of vulva owners really require. It’s very seamless; Eva II was updated to be lighter and fit even more vulvas.

What’s the common reaction from partners about Dame toys?

Do you find that your toys increase sexual wellbeing and confidence?

I also think that, by having a sex toy that caters to clitoral stimulations — and specifically one that can be used during partnered sex — really also shows people with vulvas that their pleasure is a priority. It’s not ‘normal’ to just ‘go with the flow’ during sex, and it is OK and encouraged to really know and ask for what you want. This is a really empowering message.” 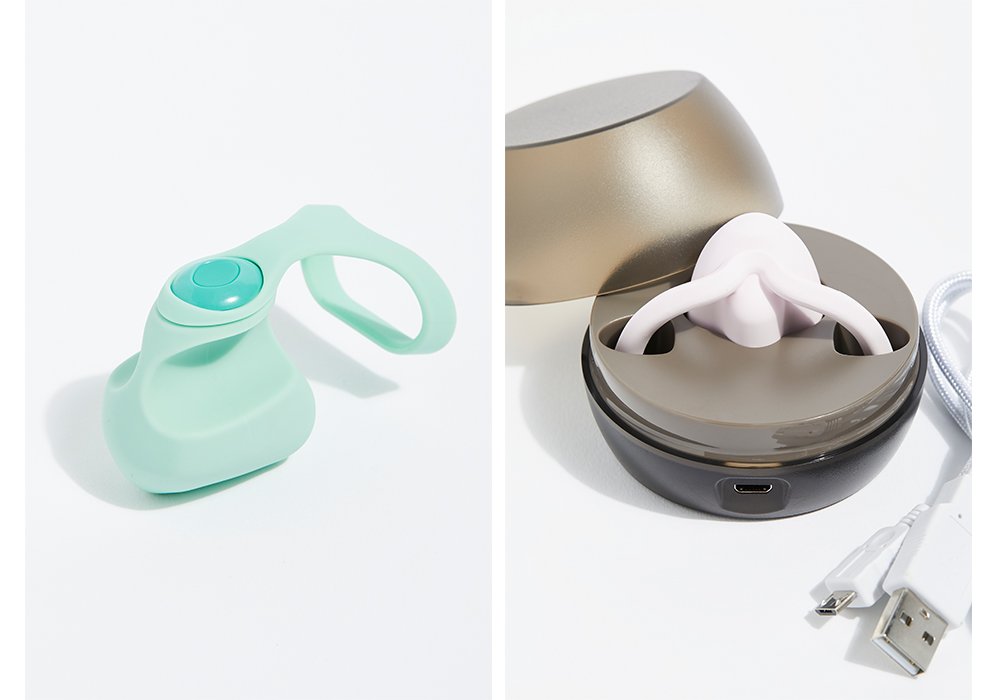 Why do you think there’s this stigma around self-pleasure for women but not men?

We also struggle as society to view female sexuality as natural — and we either totally deny it, or sensationalize it (hello Madonna-whore Complex). This means that there’s not really a space for everyday, normal, healthy female sexuality — so women often aren’t primed to prioritize that, and society is primed to accept it.

All of this is to say that, female sexuality is OK if it’s through a male lens, and it’s not OK if it’s for women-only, which ultimately makes pleasure yourself outside of the narrative we’ve been exposed to for decades (centuries? millennia?)”

Many women find it hard to climax during sex, which can lead to a lot of negative feelings and emotions. Did this factor into your decision to create Dame?

“First of all, it’s worth saying that we definitely don’t believe that orgasm is the sole goal of sex, or even the only way to define ‘pleasure.’ Pleasure can mean many different things, and orgasm isn’t always the end goal. That aside, there is something called the Pleasure Gap, which means that four times more women than men say that ‘sex is not at all pleasurable’ — so there’s obviously a disconnect. This definitely factored into our decision to create Dame. The core of this issue is that female pleasure is not often prioritized during partnered sex, which stems from a lack of education — particularly around the clitoris.

What other ways to practice self-love and self-care in your own life?

“There are tons! Whatever calms you down, centers you, and makes you a better person for both yourself and the people around you is valid. Whether that’s therapy, meditation, working out or even simply allowing yourself to indulge without shame, being gentle with yourself and prioritizing your physical and mental health are great ways to keep you healthy — mentally, physically — and make sure you can show up for the other people in your life.”

What do most people say when you tell them you design sex toys?

“Well, I was recently at a reunion, so I can tell you what my friends said: ‘I can’t imagine you doing anything else.’ ‘That is such a perfect job for you.’ ‘What do your parents think?’ (By the way, my parents also think this is the most perfect career path for me.) Generally, though, the response is intrigue. Everyone’s looking for permission to discuss these topics, and by working in this category, I sort of automatically give that to them — and I think many people find that refreshing.”

Love it )
Despite the pleasure these fun gadgets can add to boring sex lives, many people are either too embarrassed to buy them, or simply unwilling to share them with their partners. That is not right!

This is a very interesting topic. I love having sex. I believe that this should not be shy. It’s natural. Yes. I use sex toys top 10 sex toys com https://top10sextoys.com/. I like this. They bring piquancy and variety to any relationship. I think, that in sex need to try something new. Sex cements a relationship. Do you agree with me?