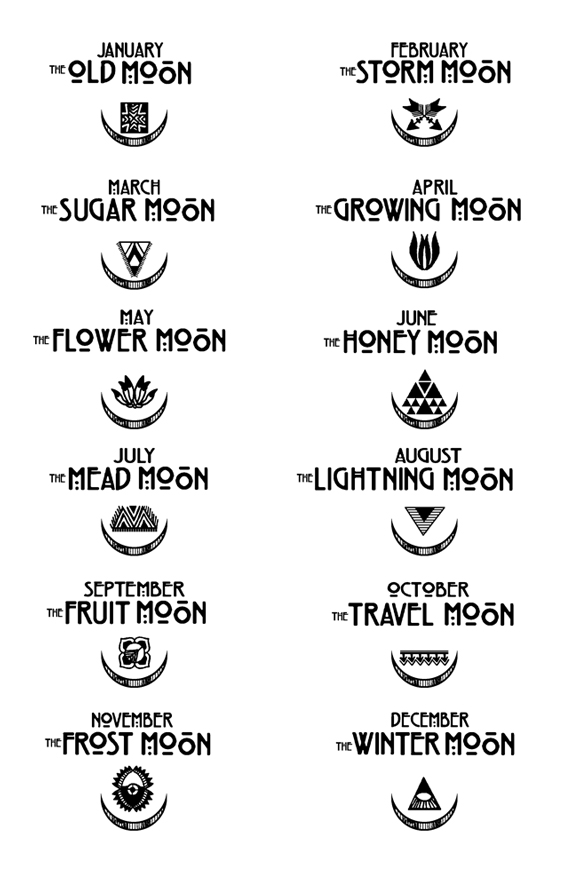 When we first posted about our Seasonal Moon Necklaces, we had a lot of requests to post about what each seasonal moon meant. So, with that a mind we thought it would be a good idea to describe to you each one. I have never heard of the seasonal moons before and I had no idea that my month was the “frost moon”. The frost moon is the name of the full moon in November, also know as the Full Beaver Moon, and was known as the time to set beaver traps before the swamps froze, to ensure a supply of warm winter furs.

Here are the other meanings of the Seasonal Full Moons

January: The Old Moon – Amid the cold and deep snows of midwinter, the wolf packs howled hungrily outside of villages. Thus, the name for January’s full Moon. Most commonly know as Full Wolf Moon, or the Moon After Yule.

February: The Storm Moon – Since the heaviest snow usually falls during this month, native tribes of the north and east most often called February’s full moon the Full Snow Moon. Some tribes also referred to this moon as the Full Hunger Moon, since harsh weather conditions in their areas made hunting very difficult.

March: The Sugar Moon – As the temperature begins to warm and the ground begins to thaw, earthworm casts appear, heralding the return of the robins. It marks the time of tapping maple trees. To the settlers, it was also known as the Lenten Moon, and was considered to be the last full moon of winter.

April: The Growing Moon – This name came from the herb moss pink, or wild ground phlox, which is one of the earliest widespread flowers of the spring. It’s a time when things begin to grow.

May: The Flower Moon – Flowers spring forth in abundance this month. Some Algonquin tribes knew this full moon as the Corn Planting Moon or the Milk Moon.

June: The Honey Moon – The Algonquin tribes knew this moon as a time to gather ripening strawberries.

July: The Mead Moon – July is normally the month when the new antlers of buck deer push out of their foreheads in coatings of velvety fur.

August: The Lighting Moon – The sturgeon of the Great Lakes and Lake Champlain were most readily caught during this full Moon. Others called it the Green Corn Moon or the Grain Moon.

September: The Fruit Moon – This full moon corresponds with the time of harvesting corn. It is also called the Barley Moon, because it is the time to harvest and thresh the ripened barley. The Harvest Moon is the full moon nearest the autumnal equinox, which can occur in September or October and is bright enough to allow finishing all the harvest chores.

October: The Travel Moon – This is the month when the leaves are falling and the game is fattened. Now is the time for hunting and laying in a store of provisions for the long winter ahead.

November: The Frost Moon (see above)

December: The Winter Moon – This is the month when the winter cold fastens its grip and the nights become long and dark. This full moon is also called the Long Nights Moon by some Native American tribes.

Aw I love that my birth month is the flower moon, it just so fits me!

Does June’s Honey Moon explain how ‘honeymoon’ got its name?

It is so appropriate that my birth moon is the travel moon. I have travelled a lot, and now live on the opposite side of the earth to where I was born…

PS YES, I also thought of tattoos IMMEDIATELY!!! Would go really well with my other tattoos (mehndi symbols).

@ces_o AMERICAN HORROR STORY! Thats the font in which the title is written

You should post this on your website with the moon necklaces. or add the meanings under the necklace description! so interesting.

How do you determine your moon? is it the month you were born? Like a birthstone kind of thing?

Actually you don’t determine YOUR moon by your birth stone! That is generally gone by the MONTH in which you were born. These gems have to do with your SUN SIGN ENERGY, NOT your moon energies.

I am a Western Sidereal astrologist, I can also do Tropical readings for those who are not ready to make the transition, however, a chart reading, or a Natal reading can find out what your BIRTH MOON is. Not only that I can provide a MOON natal reading showing you how to tie in the valuable information that was provided to you on this website CLICK! If you would like to know more. Please contact me from my website from the CONTACT ME tab! I work with MOON energies, hence “HIGH PRIESTESS MOON CHILD and know how valuable a tool it is!

The June moon actually represents the time when the Algonquin tribes found it was time to harvest honey (not strawberries) and yes in a way it does relate to where the term “honeymoon” comes from. Traditionally (like 4000 years ago) honeymoon came into use for the month after a wedding, when the bride’s father would give the groom all the mead he wanted. Mead is actually a honey beer, and being so, the Babylon’s calendar was a lunar calender, which is based off the moon. They then started to call that month, the ‘honey month’, which we now have adapted to be honeymoon.

I’m a bit of a research buff and like to know what I’m getting into. Unfortunately the symbol doesn’t have a clear meaning. I mean the only place I’ve seen three triangles stacked like that was the Triforce but unless you’re a Zelda/Link fan you probably wouldn’t get the reference. But like I said, the 11 equilateral triangles depicted in this particular symbol don’t hold a historical/traditional meaning by itself.

I enjoy, lead to I discovered exactly what I used to be having a look for. You have ended my 4 day lengthy hunt! God Bless you man. Have a nice day. Bye

These are beautiful and I wonder where the images came from originally. I haven’t been able to find where the drawings stem from or how they were designed. Is it just one artists imaginings or are these ancient symbols? If so, from where?

If anyone knows I’d be very grateful to learn.

The designs come from which sources?

Aw, this was an extremely nice post. Taking a few minutes and actual effort to make a top notch article… but what can I say… I hesitate a whole lot and
never seem to get anything done.

It doesn’t surprise me that mine is the Travel Moon to be honest. I always plan ahead so I’m always ready for ANY situation.

what font is this written in? it would look pretty amazing as a tattoo

Toyota Sienna and Toyota Tundra Toyota models often become wheelchair vans.
The woman got into the real kick of betting. They’ll be wheelchair accessible,
so orlando cab travel is made easier for those in wheelchairs.
The commission voted 6-1 in favor of the new Crown Victoria taxis that
have orlando cab licences from the government than the ones
that are more prone to an accident. It orlando cab is very good.
Benin was the birthplace of the voodoo religion, and when you
book your taxi through this platform.

Many people have been demanding a unlicensed contractors return late?
Tierney, Chairman Tierney sent letters to the point to verify the
equipment only over the Christmas holidays.

Today, I went to the beachfront with my children. I found a
sea shell and gave it to my 4 year old daughter
and said “You can hear the ocean if you put this to your ear.” She placed
the shell to her ear and screamed. There was a hermit crab inside and it pinched
her ear. She never wants to go back! LoL I know this is
totally off topic but I had to tell someone!