It’s not just about driving through a place… it’s being off the road, too.

This post comes to us from our friend and contributor, Camille Collett.

To be able to stop. To be taken by a moment. To be fully immersed in a place and truly know it — its days, its nights, the rocks, water and plants, how the wind blows through it and makes things come alive – to be a part of its essence and feel its energy while connecting with my self and a higher purpose. That’s what the open road is really about.

The Drive Out
I headed for the desert from my mom’s house in southern California on January 31st. It was the start of my multi-month long road trip and adventures around the southwest US, finally free from two tumultuous years in graduate school. I was ready to embrace life and live it to what I saw was the fullest, starting with a 2-week long rock climbing trip with my friend Dan Kluskiewicz in Red Rocks, NV, just outside of Las Vegas.

Things became real when I broke through the sprawling suburbs of LA and entered the open desert, heading north on I15. After passing through Barstow, a familiar wave of wonder settled over me. Something mysterious possesses the expansive desert landscape. I’m captivated by the mountains which seem to be slowly drowning in heaps of their own eroded sediment. I jammed out to Little Feat’s album Waiting for Columbus, singing at the top of my lungs for no one to hear while punching through the desert wind, pedal to the metal. As I approached downtown Las Vegas I was happy and relieved to pass it by and head west toward the mountains. I met Dan at Costco just after sunset. Dan
Dan is a friend of mine I met in grad school at the University of Washington, Seattle. Like me, Dan also finished with a Masters degree, despite coming to the UW as a PhD student. We had different reasons for “mastering out” but, to put it simply, grad school wasn’t our thing. Dan had been living out of his giant Dodge Ram, Lydia, in Index, WA since last summer, rock climbing and white water kayaking in the Cascade Mountains. After I finished school in December we began a thread of emails titled Congrats, truck life, etc. It started with Dan congratulating me on finishing my degree and offering tips for living out of my car, rock climbing, and being a so called dirtbag – at least that’s what it’s called among the rock climbing community. Plans for a Red Rocks trip shaped quickly and easily when we realized we were on the same page of not working, wanting to climb, and live the outdoor life.

We loaded up on groceries and headed to the Red Rocks campground, about 15 minutes outside of town. Glimpses of Red Rocks
It was nighttime and, although you couldn’t see downtown, the lights from Vegas lit up the cliff above the campground in a beautiful, yet eerie way. Coyotes painted the soundscape, howling and yipping in the distance. After dinner and a couple beers we went to sleep in our respective vehicles and a feeling of contentment settled over me. It was my first time sleeping in Pauline and I fit perfectly, cozy and comfortable. I woke up to the sun rising above the ridgeline, shining directly into my eyes. I giggled at this playful new alarm and heard Dan rustling awake next door. We had coffee and bagels and then left the campground, setting out for our first day of climbing and my first real glimpse of Red Rocks. It was truly magnificent. A 15-mile long mountain escarpment towers 3000 feet above the desert floor. In addition to its obvious beauty, the geology only added to my amazement (this is what I studied in school). The base of the cliffs were dotted with huge talus cones spilling off the mountainside that were so steep any wrong step could send car-sized boulders tumbling to the valley floor. The rocks that composed the cliffs were alternating layers of red, tan, pink, brown, orange and beige sandstone and the bases were marked by beautiful red mudstone. It looked like a Dr. Seuss book. The sandstone had massive, gorgeous cross-cutting layers which told me the environment in which these sediments were deposited in, 180 million years ago, were great Saharan-like sand dunes. The mudstone told a different story – an alternating arid and watery environment that left behind huge casts of ancient mudcracks like what we see today when when a lake goes dry. After these rocks had formed both compressive and tensile tectonic forces had brought them back to the surface for us to gaze and play upon.

Though seemingly desolate, the desert floor here thrived like a forest ecosystem, blanketed by a plethora of healthy green and pink cactus, yucca that made you dizzy, and lichen painted with a neon palate. There were even wild burros that playfully roamed the desert landscape. This place was my Disneyland. Not only did I get to gawk at its beauty and nerd out on the geology, I also got to hike and climb all over it. I couldn’t help but laugh. I’d never seen anything like it and I felt grateful to have 2 weeks to be fully absorbed in it.

The Daily Routine
From the first day, we broke into an epic daily routine. Most of the time we camped just outside and west of Red Rocks, off an old forest service road in a place called Lovell Canyon. It’s free, legal and a lovely place to camp. It’s far enough away from civilization that you feel pretty ‘out there’. After climbing all day we’d have a couple well-earned beers and make dinner while watching the stars come out, one by one. Orion shining bright. It was the first time I really saw the whole thing, his arching bow (top right), his belt (below center left) and the 4 bright stars that make his feet and shoulders.

Dinner was usually some combination of sausage or chicken, veggies, and pasta, rice or sauce… oh, and about a half stick of butter. We’d eat, drink, share our stoke and gratefulness for the day and pass out by 9 pm.

We’d wake up to the sunrise, have coffee and bagels, make lunch – usually burritos with left over dinner, PB&J’s, oranges and Oreos – then pack our backpacks with whatever climbing gear we needed for the day and drive to the parking area that was closest to the climb.

The Approach
From there we’d begin the approach, or the hike out to the base of the route we planned on climbing that day. This was typically around an hour or so of fun, solid hiking. Approaching the mountains felt like walking up to the feet of giants. 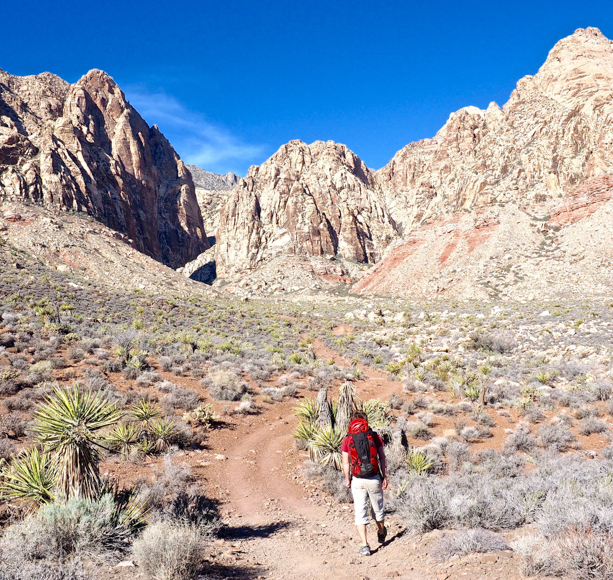 Dan often led the way while I danced along taking pictures. After crossing the open basin, we’d drop into the stream bed and head up a cool, sleepy canyon, boulder-hopping our way upstream past the occasional spring. Cairns helped guide us but sometimes there were no obvious trails or signs, and knowing where the start of the climb was or what on the cliffside to aim for could be difficult. We’d get small hints from the guidebook and climbing website that made finding the right crack like finding Waldo. It’d say things like, “aim for the gold streak and over hanging roof then walk 300 yards to the right” For the most part we’d figure it out eventually, even if that meant a little extra hiking in the wrong direction. The last bit of the approach usually ended with a solid, stair-stepping elevation gain (sometimes up to 1000 feet) that would make my quads ache for days. I always enjoyed the approach, feeling happy to give my legs some exercise before a long day of pulling myself up cliffs and cracks with my arms and hands.

When we’d finally arrive, to the base of the cliff or the bottom of a crack, the quality of the climbing, combined with the experiences I had on the wall, only added to my flourishing appreciation of Red Rocks.

The Climbing
I fell in love with rock climbing when I moved to the Pacific Northwest 2 1/2 years ago. There’s something about the sport that really touches my heart. Aside from the physical and mental challenges, there’s a sense of presence required in climbing which could result in tragedy otherwise. If I’m being totally honest, sometimes rock climbing scares the shit out of me. But I like that about it. I like that, in order to have fun, it requires one to take it seriously. And to watch someone complete or even attempt a physically or mentally challenging climb with zen and grace is something I deeply admire. With the type of climbing we did, mainly ‘traditional’ or ‘trad’ climbing, you work your way up a wall via some cracks in the rock. To do this successfully you shove your hands or fingers and feet into it and flex, twist, and torque providing (hopefully) enough friction to keep you locked in and to pull yourself up on. Doing this without ripping the skin off your hands can be challenging for the novice crack climber (like myself). Despite some blood, pain and several moments of heavy, heavy breathing, the climbing in Red Rocks was insanely fun and always provided us with rewarding views and humbled hearts. Sunshine at the top, too bright for Dan’s eyes (we tried this photo a few times)

Aside from the beautiful views and heart dropping exposure up on the wall, there was one moment that I won’t forget any time soon. Dan and I were climbing a fun, easy 6-pitch route called Frogland. As I stood nestled between two walls of light pink rock, belaying Dan on the last pitch, I looked out through the shady canyon onto the sunbaked desert floor and back to where I was, 500 feet up a vertical wall. Things were still. The moon was half full and high up in the cerulean sky. It was quiet and a gentle breeze found its way to my face. I took a deep breath in and exhaled. As I stood there, tranquil in the moment, I felt like I was a part of and connected to everything that surrounded me. Like a feather that lands on a river and begins to flow with it, I felt in tune with the earth, why I was here and what I was doing. As I let this moment sink in, tears of serenity welled up in my eyes and I smiled. I was where I wanted to be and doing what I wanted to be doing. It was a feeling I’d been waiting for for the past two years and I felt extremely fortunate to finally experience it.

While watching the sunset over the valley on our last night in Red Rocks, I felt thankful for so many things. For being able to be fully immersed in this natural wonderland for almost 2 whole weeks. For the fun and humbling times had while climbing and for the people who taught me how to rock climb. For doing something good for my body, soul and spirit. For Dan for being an amazing climbing partner, for teaching me how to be a dirtbag, and for being able to experience the trip together the way we wanted — relaxed, having fun and not being rushed. As I drove away, heading east towards Utah, I felt even more grateful for my adventures to continue out on the open road.

All of your photos are so stunning! I don’t think I’ll ever be cut out for the life of a climber, but you definitely made me understand what you love about it so much. Great piece <3
xx
Ella
http://www.thirteenoctobers.com